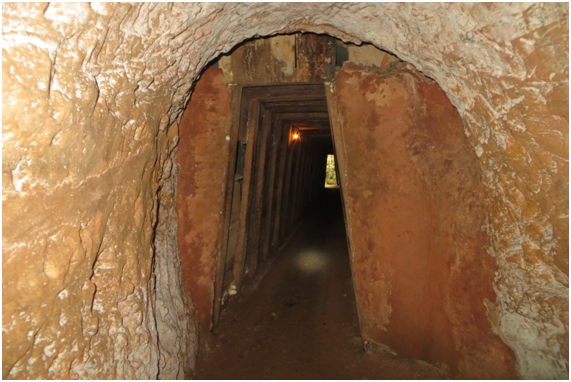 Vinh Moc tunnels and Vinh Linh tunnel village system are magnificent underground military architectures, born during the resistance war against the US to save the country. With the slogan “militarization of the whole people, fortification of the whole region”, Vinh Linh army and people have dug trenches with many functions: headquarters, logistics warehouse, school, hospital, living area. of each family…, arranged throughout the residential areas, along the way, along the fields, along the coast, connected by a system of interlaced trenches instead of roads on the ground.

From the end of 1965 to 1968 (according to incomplete statistics), the whole Vinh Linh district had 114 tunnels with a total length of more than 40km, a trench transportation system of more than 2,000km and hundreds of other tunnels. “The tunnel village” – first appeared in the history of the Vietnam War, expressing the will to “not leave an inch, a glass never leave” to fight to protect the homeland and keep the blood vessels open to the front line.

Belongs to Vinh Moc and Son Ha hamlets, Vinh Thach commune, 1,060.25m long (excluding niches, apartments…); The tunnel height is from 1.7 to 1.8m, including 13 doors (with 6 doors leading to the hill, 7 doors leading to the sea). Along the two sides of the tunnel, there are small niches that can accommodate 2 to 4 people. In the basement, there is also a hall (capacity of 50-60 people), as a meeting place, watching movies, performing arts… and some other works such as: bulletin board, maternity house, 3 wells, etc. toilets, surgery station, dispensary, cooking kitchen (Hoang Cam kitchen).

In addition to the underground system of tunnels and tunnels, Vinh Moc tunnels also have works on the ground such as trenches, artillery embankments, breakwaters, galleries…

Located on the territory of Hien Dung village, Vinh Hoa commune, including 2 tunnels:

The tunnels of the Commanding Committee of the People’s Armed Police in  Vinh Linh area  have a length of about 1,540m, including 18 up and down doors, 15 ventilation wells, now only door 1 (near Cau slot) is intact.

Tunnels Information of the People’s Armed Police in Vinh Linh area  has 8 doors up and down and 10 ventilation wells. Currently, there are only doors 1, 2, and ventilation wells 4 (1st floor). The total length of this entire tunnel is 761m (including the current part and the assumed part).

–  Troong Mon tunnel system : located close to the coast of Vinh Kim commune, with a total length of 170.60m, including 5 gates, of which, there are 3 gates leading to the hill and 2 doors leading to the sea, with 4 main routes.

–  Cua Hang Tunnels : Because the tunnels were dug close to the coast, over time, under the influence of tides, especially in the rainy season, there are sections of the tunnel that have been filled with sea sand. The tunnel axis runs in the East – West direction, with 2 doors. Current status, door No. 1 opens to the East, 1.05m high, 1.2m wide; Door 2 opens to the west, 1.25m high, 1.2m wide.

–  Mui Si Tunnels:  located on the coastal road from Cua Tung to Vinh Moc Tunnels, in Thach Ban neighborhood, Cua Tung town. The tunnel has a protected area of ​​26,204m2 (area I: 9,820m2, area II: 16,384m2). Currently, this area is the place to plant casuarina trees to block the wind, on the road surface of the tunnels, there are still many bomb craters. Over time, the impact of nature and humans, so this tunnel has been partially damaged.

Located on a hill in Nam Cuong village, Vinh Nam commune, protected area is 6,586m2 (area I: 5,049m2, area II: 1,537m2), total length 76.12m, height from 1.7 – 2m, width from 1.6 – 2m. The tunnel structure is arched, the two tunnel walls are relatively straight, the dome ceiling is short and smooth and smooth. There are two small drainage channels on either side of the wall. Currently, the relic still has 3 main tunnels, connected to form a solid tunnel system.

Vinh Moc tunnels and Vinh Linh tunnel village system are historical evidences of strength, indomitable spirit, unyielding will to keep the village, unique creation of people’s war, shining symbol of people’s war. revolutionary heroism, greatly contributing to the victory of the resistance war against America to save our nation.

Today, Vinh Moc Tunnels and Vinh Linh tunnel village system have become a unique and unique historical and cultural heritage of great significance in the education of revolutionary traditions, patriotism and labor. creative activities, and at the same time contribute to attracting tourists and promoting the economic development of the locality.