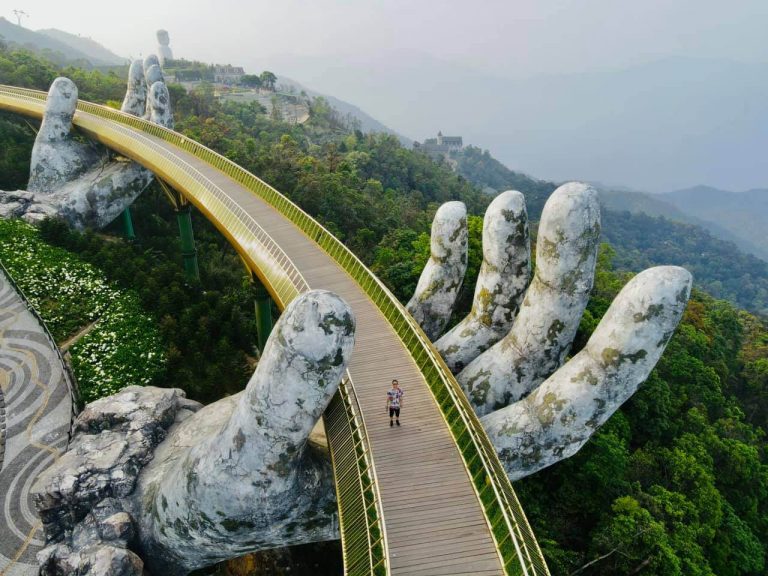 Not only being named the most livable city today, Da Nang is also famous for its extremely special bridges because of its unique design and meaning in life. The article “The most famous bridges in Da Nang” below will provide some useful information for you in your journey to discover Da Nang city .

As the first revolving bridge designed and built by Vietnamese people, Song Han Bridge was built in 1997, completed after two years. Han River Bridge was built with a length of up to 487.7 meters, a bridge width of 12.9 meters, including 11 spans, each span is divided into 33 meters.

The original purpose of the bridge swing was to facilitate large and bulky cargo trains to move easily and smoothly.

The most unique feature of this bridge in Da Nang is that it will rotate 90 degrees in the middle around the axis and lie along the river’s flow for about 2 hours a day, from 1am to 2am.

So staying up at night to see a peaceful Da Nang and a rotating bridge will be unforgettable impressions of each person.

This bridge in Da Nang is famous for its unique shape and interesting things associated with it. Dragon Bridge is considered a symbol of Da Nang city.

The monumental bridge bears the architecture of the Ly Dynasty. Like the name, the bridge has a dragon-shaped architecture winding and reaching into the sky, symbolizing the growing development of Da Nang day by day.

Every night, you will see the bridge become really outstanding with golden light running along the dragon’s body. Not only that, the dragon head will have a fire and water spray on Saturday and Sunday at 21:00 every week.

The majestic view of this bridge in Da Nang will surely become one of the unforgettable marks in your discovery journey.

As a hot check-in point and the most famous Da Nang bridge, the Golden Bridge appeared and received a lot of compliments and excitement throughout the media both at home and abroad because of its shape and design. its.

The bridge is covered with golden paint and is supported by a pair of mossy hands sprouting from the rock. Because it is located at an altitude of over 1400m above sea level, the Golden Bridge gives you a feeling of being in a fairyland with floating clouds.

To get to the Golden Bridge, you will have to take a cable car to Ba Na Hills. Ba Na Hills is an entertainment and resort complex with many games and services.

In particular, the Golden Bridge (Golden Bridge) – Ba Na Hills was voted by the US news site – Insider as one of the 28 most beautiful bridges in the world.

Golden Bridge is one of the attractions in the Sun world Ba Na Hills tourist area. Ba Na does not collect admission tickets separately for this attraction, instead, you can buy an entrance ticket to the resort to experience the full service here!

Located in the middle of two large bridges, the Dragon Bridge and the Han River Swing Bridge, the Love Lock Bridge with a length of 68m always attracts thousands of visitors.

True to its name, this bridge in Da Nang is especially for couples who love each other. Couples can bring their own locks or order locks and hang them on the bridge themselves.

Love Bridge is decorated very romantic, you can comfortably come here to enjoy nature and check in beautiful pictures.

So, don’t miss the bridges in Da Nang during your tour and explore the city for interesting and impressive experiences!